Justice of the Supreme Court of Maldives since 04th September 2019 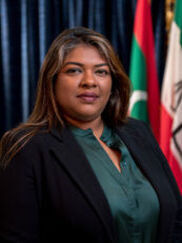 Honorable Uza. Aisha Shujune Muhammad was born in Kaafu- Male’, Republic of Maldives, on 23rd December 1977. She completed her Bachelor of Laws (Honours), under the University of London External program at the Royal Institute in Colombo and read for her Master of Laws at the University of Western, Australia. Uza. Aisha Shujune Muhammad was appointed as a Judge of Supreme Court on 04th September 2019.
She has been in government service since 1997 and over the past years, she has fulfilled a number of positions in the government including; Assistant Legal Officer at the Juvenile Court and Ministry of Justice, and Deputy Director, Legal Affairs at Ministry of Justice. She became one of the first two female judges of the Maldives, when she was appointed to the bench of the Civil Court in 2007. After taking a leave from service in 2008 to read for her postgraduate degree, Uza. Aisha Shujune Muhammad joined Civil Court again in January 2009 - a position she held until her resignation as a Civil Court Judge on 31 December 2014.
After her resignation from the bench, Uza. Aisha Shujune Muhammad worked at Nasheed & Co Law Practice, as Associate Partner. She was also elected as a member of the Executive Committee of the Bar Council of Maldives in 2019.
Moreover, upon her election to the United Nations Subcommittee on the Prevention of Torture (SPT) in 2011, Uza. Aisha Shujune Muhammad became the first Maldivian to be elected to a treaty body of United Nations. She worked with the SPT for two full terms from 2011 to 2018, and was its Vice Chairperson for Jurisprudence and SPT Rapporteur for the duration of her tenure.